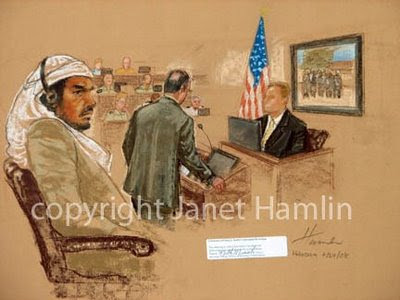 Several special agents are testifying today, and I managed to get one sketch here before flying out in a few hours.
I'm hoping to return as the case comes to a close- momentous, as the second tribunal to come to closure. Keep your eyes peeled- I am adding a link to this blog that covers the tribunals daily.
Posted by hamchat at 8:08 AM 2 comments:

A full day in court, Hamdan 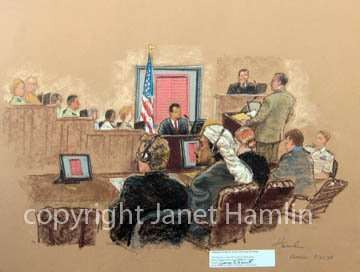 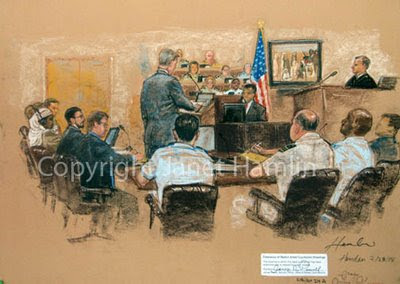 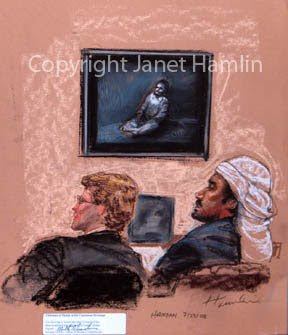 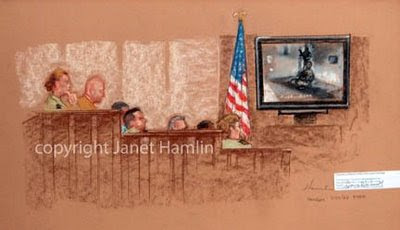 Today was a full day in court; my last for now. Much of the day was spent watching a video interrogation after the morning testimony. I was able to move to the other side of the courtroom to get a fresh perspective- literally. After the group scene I chose to focus on the video imagery as it won't be made available in any other form.
Posted by hamchat at 3:02 PM No comments: 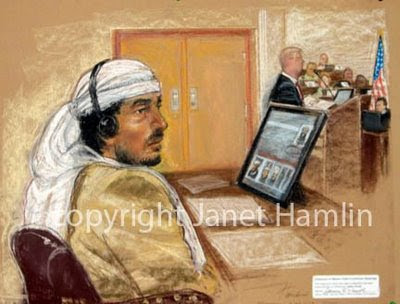 I've flown in to Guantanamo Bay today and by noon was in court; or rather, in the court's hallway. I'm here to sketch Hamdan procedures- Hamdan was Osama bin Laden's driver. The witness up stipulated to not be drawn and therein insued confusion and the utterly frustrating experience of being a court artist not allowed in court. The happy ending of sorts is that I managed to get one done when I was allowed in at the tail end of the day- 4:30. Given that every drawing is not allowed out until it has been approved by military it was clearly unnecessary to keep me out- I would not have been able to draw him anyway. Ah, well, what's done is done, and tomorrow is a full day- in court. Just an added note, the military did apologize several times over and assured me it won't happen again.
Swing by tomorrow eve for an update..
Posted by hamchat at 5:05 PM 2 comments: 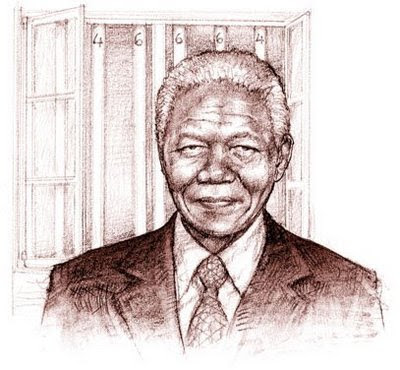 Nelson Mandela celebrated his 90th birthday today, and the photos of that celebration speak volumes. What an incredible person.
Posted by hamchat at 5:36 PM No comments: Dr. Bakey's artificial heart was a groundbreaking achievement. With his passing, a tip of the artistic hat and my respects for the great work he did in his lifetime.
Posted by hamchat at 9:50 PM No comments: